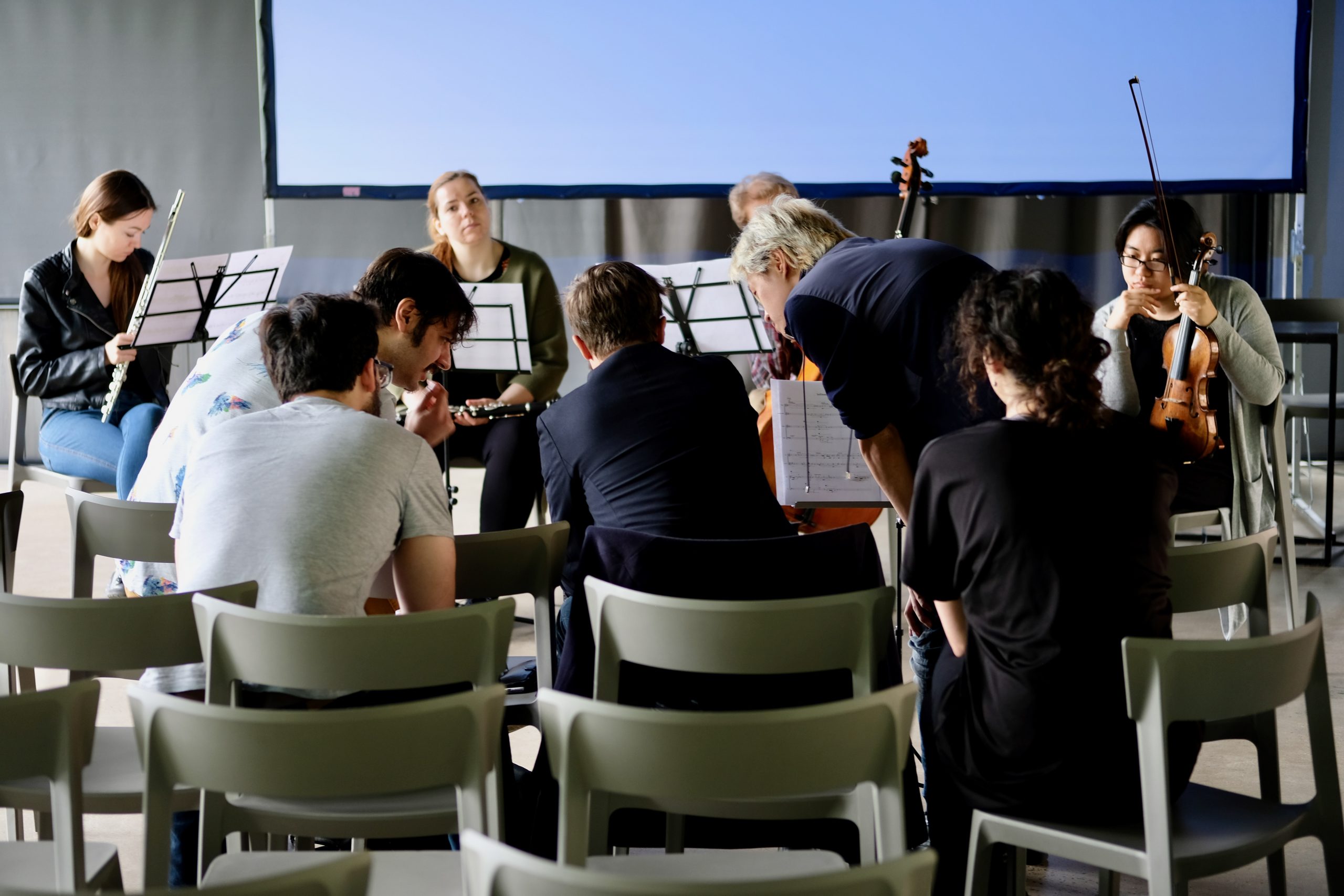 The reMusik.org Festival is a point of intersection where the diverse world views of contemporary composers meet at a crossroads of musical paths that have emerged in the past few years. The festival offers various musical concepts that facilitate the learning and understanding of a new, unique musical language of numerous dialects created by late 20th century and 21st century composers.

The festival program has numerous highlights; instead of relying on the form of traditional concerts it will be additionally offering master classes, pre-rehearsal talks, scientific conference, forum, presentations, educational lectures and workshops. The concerts themselves are designed to be inherently educational. And an emphasis on chamber ensemble programming allows the opportunity to hear both young emerging groups and longtime leaders of the European contemporary music scene, provoking creative discussions and a mutual exchange of ideas in the artistic community.

Within the framework of the 2021 festival, reMusik.org offers a composition course which will be held from May 21st — June 3rd in St. Petersburg, Russia. This creative composing lab is an exciting opportunity for young and emerging composers from around the world. More than 25 composers will be selected through a portfolio application process to meet and work with honored composers and internationally-acclaimed ensembles invited to this year’s festival.

The Composition Course gives participants access to distinguished composers, workshops, composition lessons, lectures and master classes while affording each participant ample time to compose in a relaxed environment and enjoying from the festival concerts and its other events.

During the 12 days, participants will have individual lessons with the three tutors, and they are welcome to attend at any time, and as much or as little as their Course activities allow, to observe other lessons and workshops. Each participant will have the opportunity to supervise the preparation of his/her own work from the very beginning to its performance at the concert or workshop, may discuss the composition and execution aspects of his/her work with the tutors and the ensemble’s directors or may have personal contact with the individual instrumentalists.
The festival will take place offline in Saint Petersburg, but in connection with the COVID-19 pandemic, it’s possible to take part in the composition course fully online.

Eligibility
All composers age 18 and over.

All applications must be submitted online. Applications are reviewed by a panel comprised of distinguished proponents of contemporary music, including reMusik.org’s esteemed faculty, professional musicians, and composers. The committee reserves the right to request additional information from the candidates or to make changes to the rules if circumstances require.

For additional call the jury will select several composers into three groups: Group A, Group B and Group C. Each group gives participants a possibility to advance their skills through the following opportunities online or offline:

Group A
● Minimum 3 hours of individual lessons with 3 different tutors** (Each lesson is 1 hour);
● Performance and professional recording of their work at one of the festival concerts;
● 45-minutes presentation of their work;
● Access to all events and concerts.

Group B
● Minimum 3 hours of individual lessons with 3 different tutors** (Each lesson is 1 hour);
● Performance a part of their work during 1—2 workshops/reading sessions with soloists or ensembles-in-residence;
● 45-minutes presentation of their work;
● Access to all events and concerts.

Group C
● Minimum 3 hours of individual lessons with 3 different tutors** (Each lesson is 1 hour);
● 45-minutes presentation of their work;
● Access to all events and concerts.

Free Auditors
Auditors are welcome to join the St. Petersburg International New Music Festival. This is a great opportunity for anyone wanting to learn from the accomplished artists and be immersed within the excitement of the Festival. All auditors receive all the benefits of observing experienced artists working with students. They will have access to all educational events. The preliminary registration is obligatory.

The Festival is definitely a good reason to come to St. Petersburg in May. Participating at this event will give you an opportunity to see St. Petersburg with the eyes of the insider and enjoy the famous White Nights Season on St. Pete’s Bridges!

*You may apply for multiple selection groups
** Participants will have individual lessons with 3 or 4 different tutors.

Group A
Participation Fee: €590
Making a payment: €390 To be paid no later than 7 days after notification of participation. The remainder €200 to be paid upon arrival in St. Petersburg.

Group B
Participation Fee: €450
Making a payment: €290 To be paid no later than 7 days after notification of participation. The remainder €160 to be paid upon arrival in St. Petersburg.

Group C
Participation Fee: €290
Making a payment: €190 To be paid no later than 7 days after notification of participation. The remainder €100 to be paid upon arrival in St. Petersburg.

Payment Options
● If a sponsor agrees to pay your fees, reMusik.org will invoice your sponsor directly. You must therefore provide the reMusik.org Office with an official sponsor letter on letterheaded paper;
● Tuition fees are generally non-refundable even if an application is either rejected;
● The reMusik.org offers an online payment facility, as well as paying by bank transfer;
● You’ll need to pay your tuition fees in full before the start of your course. This is very important – if you don’t do this you won’t be able to enroll on your course.

In addition to the application form, please submit the following:

Notes:
The composer submits an existing pieces which never performed in Russia. At least one of the scores must be submitted for one of the following lineups:
– flute, clarinet, violin, cello, piano, percussion (1-6 performers);
– saxophone, electric guitar, cello (full lineup);
– solo electric or classical guitar;
– solo saxophone;
– solo piano.

Adding limited electronics to each lineup is possible, please also send your technical rider together with application.

Composers admitted to the workshop (Group B) must send, no later than April 30th, 2021, the score and the instrumental parts of the piece to be used for participation in the workshop.

● English Language
● Students are expected to attend their classes and workshops. Tutors may take attendance into account in assessing a student’s performance and may require a certain level of attendance for participation in the course.
● Foreign students will receive an official invitation to the festival from the Saint Petersburg Contemporary Music Center “reMusik.org”. Students living in countries that have visa services with the Russian Federation, must apply for their visa, independently, at the nearest embassy or consulate of the Russian Federation.

Please note that an invitation letter by reMusik.org does not guarantee you will receive a visa. The decision to accept our invitation letter or to grant visas is at the sole discretion of the embassy/consulate/visa center.

We understand that an invitation letter is helpful during the visa process and we wish to support all of our attendees in their efforts to secure the needed travel documentation. However, each country requires different documentation. We offer a general letter that covers the majority of the required information requested. Advance travel planning and early visa application are important. It is recommended that you apply early for your visa.

● Travel, housing, living costs and visa expenses are the individual responsibility of the participants and reMusik.org is not responsible for paying that.
● Incomplete applications or applications which do not include all the requested materials mentioned above will not be accepted.
● Each participant should take a coronavirus test (A polymerase chain reaction “PCR” test) at least 72 hours before the trip.
● Each participant should have a Medical Insurance Policy. Medical Insurance must be valid throughout the territory of the Russian Federation and cover the entire period of Russian Visa validity.

1— 3 Participants will be selected to be performed at the next Festival in May 2022 and their work will be published by Edition reMusik.org.

When do I have to pay my course fees?

You’ll need to pay your tuition fees in full before the start of your course. This is very important – if you don’t do this you won’t be able to enroll on your course. Please note that tuition fees are generally non-refundable even if an application is either rejected.

Group A
Making a payment: €390 To be paid no later than 7 days after notification of participation. The remainder €200 to be paid upon arrival in St. Petersburg.

Group B
Participation Fee: €450
Making a payment: €250 To be paid no later than 7 days after notification of participation. The remainder €200 to be paid upon arrival in St. Petersburg.

Group C
Participation Fee: €290
Payment by Instalments: €190 To be paid no later than 7 days after notification of participation. The remainder €100 to be paid upon arrival in St. Petersburg.

How to pay for your course fees

The reMusik.org offers an online payment facility, as well as paying by bank transfer.
Please note that tuition fees are generally non-refundable even if an application is either rejected.

To make a payment online for your course, you need a debit or credit card. This is the quickest, most efficient way to pay. We can take Visa, and Mastercard cards.

Make sure you keep your confirmation email as your receipt of payment. If you have any questions about your online payment, email us at contact@remusik.org

Payments can be made by bank transfer directly into the reMusik.org’s bank account. We do not generally recommend this method of payment however if you intend to use it please be aware that it can take up to 10 working days for the money to be processed.

If you’d like advice on whether or not this is the best method of payment for you please email us at contact@remusik.org

It is important that you quote your name (full legal name) and the type of payment (eg composition course fee) so that your payment can be identified when received.

All payments should be transferred into the following bank account:

Can I apply for multiple selection groups?

Yes, you may apply to any selection group for which you are eligible. Please note that you may have to submit one application per profile and/or function group.

1— 3 Participants will be selected to be performed on the next Festival in 2021 and their work to be published by Edition reMusik.org.

Edition reMusik.org is a Russian digital print publishing house specializing on publication of contemporary music.
reMusik.org makes a significant contribution to the development and popularization of new music, which makes it possible to initiate new publications, educational publishing projects, presenting works of contemporary composers, authors and musicians to a broad range of readers and listeners.

Being integrated into the structure of the Center, Edition reMusik.org provides a platform for business communication between composers, musicologists, artists, music groups and concert organizations in Russia and abroad.

Auditors are entitled to observe lessons, classes and all other Saint-Petersburg International New Music Festival events but will not receive lessons or have a work performed. Depending on enrollment, a masterclass for auditors may be offered. This will be announced at a later date.

We are able to offer several types of service for Festival participants and ticket-holders only:

Composer, Vice-Rector for Research and Development of the Vaganova Academy