The international new music festival “Sound Waves” passed its 30th anniversary last year. Following the traditions of our concert programs dating back to 1989, we attentively follow innovations of the 21st century. 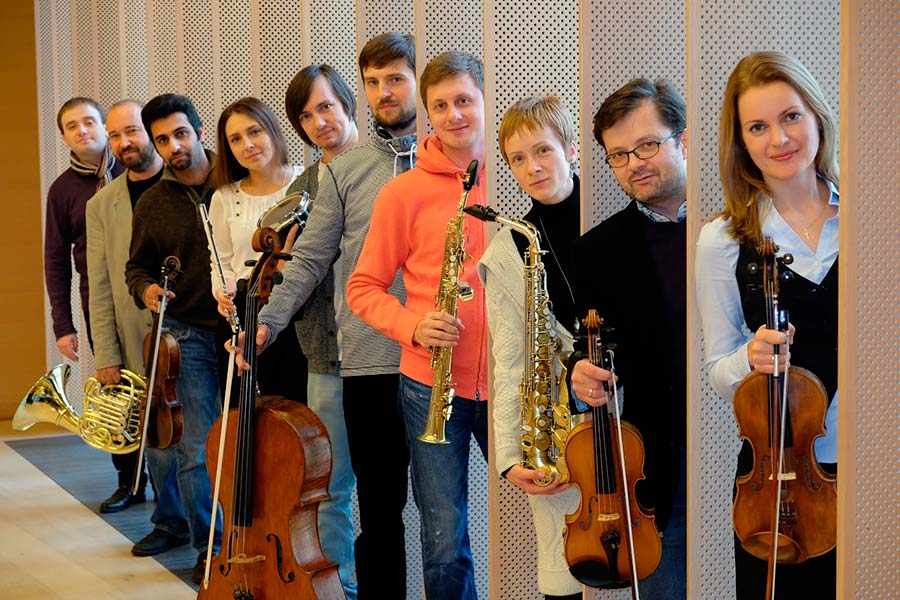 Mariinsky New Music Ensemble was founded in 2016 by the composer and violinist of the Mariinsky Theater Orchestra Alexei Krasheninnikov. Over the past years, the ensemble has established itself as a highly professional collective, actively promoting the music of modern Russian and foreign composers. The ensemble gives concerts as part of its own subscription in the halls of the Mariinsky Theater and takes part in the St. Petersburg contemporary music festivals (“Sound Ways”, “Musical Spring in St. Petersburg”, etc.). 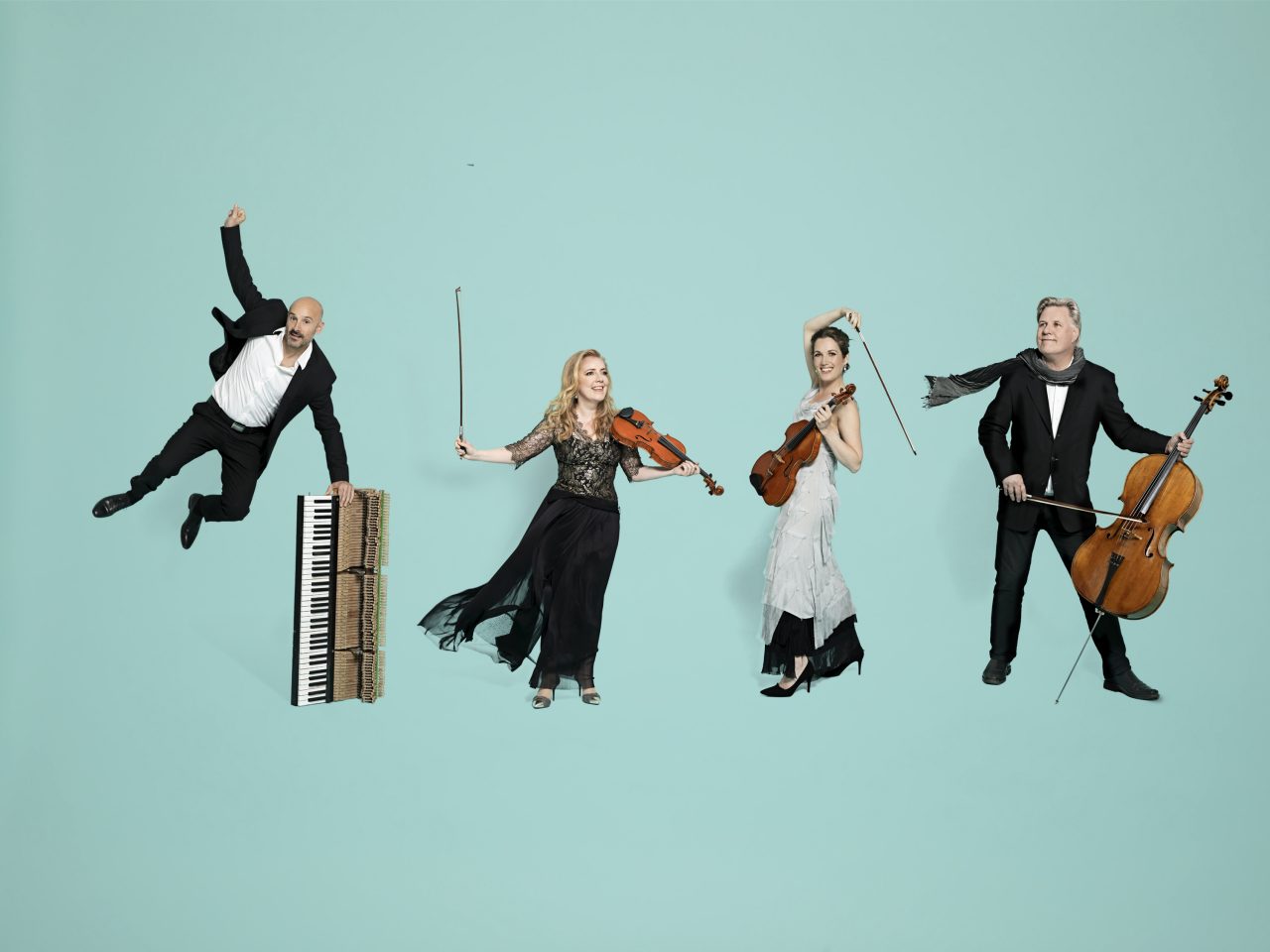 Rudersdal Chamber Players
It was the internationally acclaimed composer Lera Auerbach, who had the idea for Rudersdal Chamber Players. She was featured composer at Rudersdal Sommerkoncerter 2017 and felt enthusiastic about the programming and the atmosphere. In order for the festival to reach new heights, she suggested forming a flexible ensemble in residence consisting of dedicated chamber musicians. Besides Rudersdal Sommerkoncerter, the Chamber Players have performed at important Danish festivals such as Sorø International Music Festival and Golden Days Festival as well as in chamber music societies and churches. In November Rudersdal Chamber Players are touring in Russia and will play the opening concert at the Sound Ways Festival. Furthermore tours in Poland, Norway and the USA are in the planning. The musicians are keen on interdisciplinary projects of relevance to society, and currently they are working on a 4-year interdisciplinary project combining music, art, science and history. This interest has also led to a performance at Copenhagen Art Week and the recording of a musical birthday greeting for Lech Walesa In August 2018 Rudersdal Chamber Players played works by the world famous Giya Kancheli, who expressed his admiration: ”Rudersdal Chamber Players is an outstanding ensemble. All members are first class instrumen-talists with a responsive attitude and a deep understanding of the musical material. This is the chamber music making at very high level.”

The vision unlimited is the most defining word describing Rudersdal Chamber Players:
– Unlimited in creativity – because they are devoted to convey the music in new ways doing interdisciplinary projects with visual artists, journalists, historians, etc;
– Unlimited in sound – because the ensemble can be transformed to larger or smaller groups of various instruments;
– Unlimited in expression – because they play anything from baroque to romantics and contemporary music. 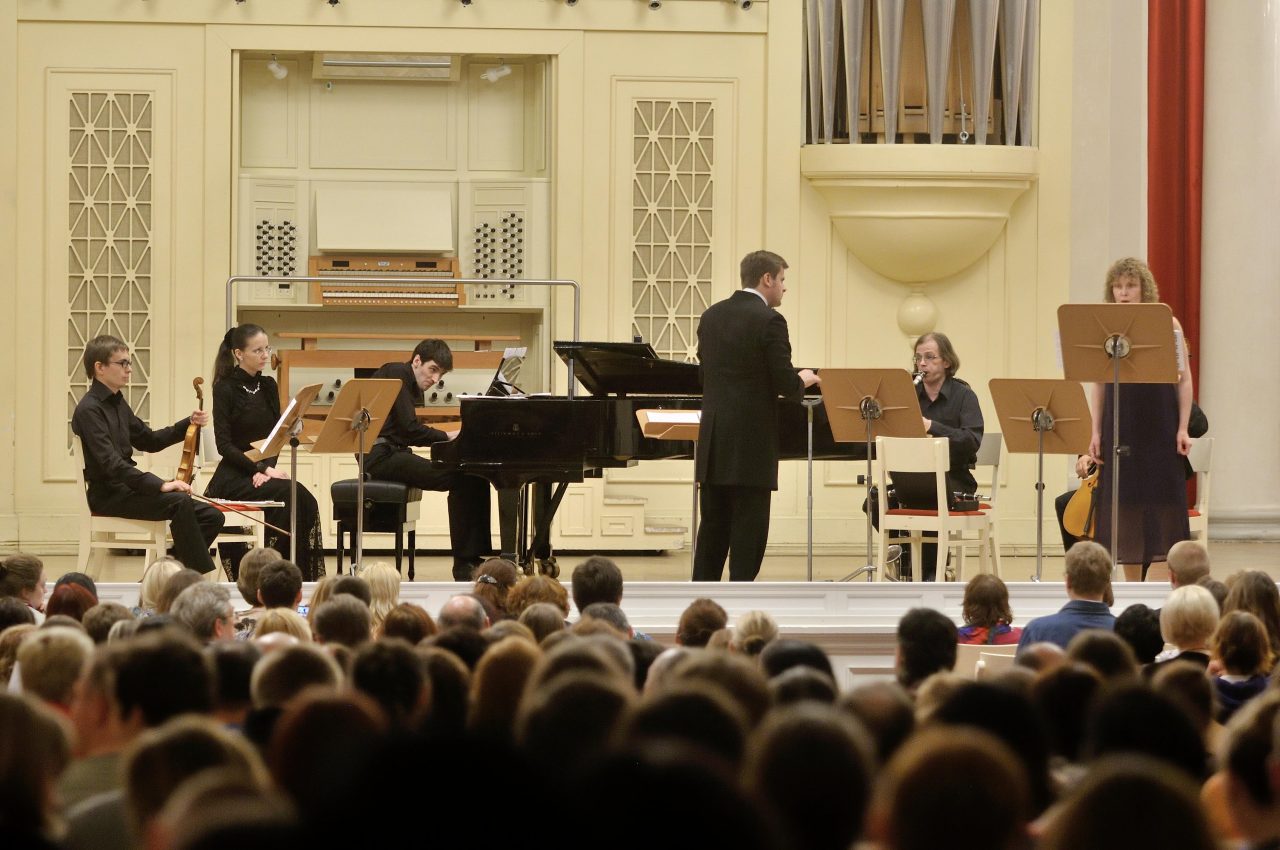 Ensemble of New Music “Sound Ways” was founded in St. Petersburg in 1994 to perform works by contemporary Russian and foreign composers. Over the years, the ensemble has performed in Germany, Switzerland, Denmark, Ukraine, Mongolia, Finland, Estonia, it is a regular participant in the festivals Sound Ways and Musical Spring in St. Petersburg and has recently been functioning as a festival ensemble. The basic of ensemble – flute, clarinet, violin, cello and piano, if necessary, is replenished with additional musicians. The ensemble collaborated with conductors B. Kawier (USA), F. Panisello (Spain), M. Valkov (St. Petersburg). The artistic director of the ensemble is Alexander Radvilovich. 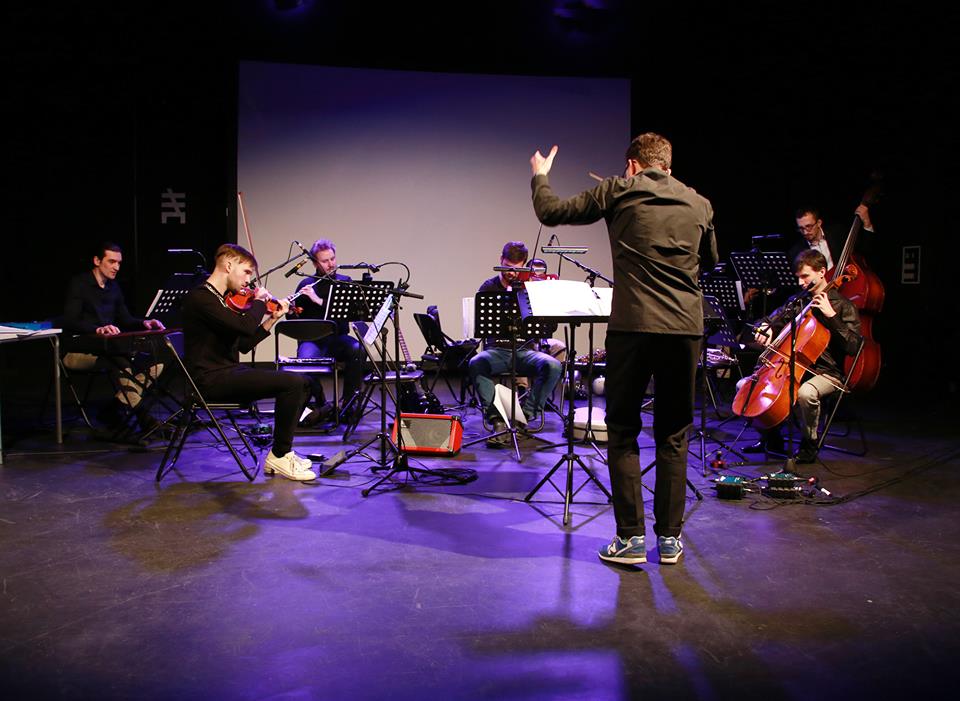 During its existence, the ensemble took part in the festivals “From the avant-garde to the present day”, “Sound paths”, “Fin de siecle”, “World of sound. Microtone innovations”, “Blurred edges” (Hamburg, Germany) and others. For the first time in St. Petersburg he performed more than 100 works by contemporary Russian and foreign authors, took part in a master class of the German new music ensemble “Recherche Freiburg” (as part of the festival “Art Square”).
he team played at many prestigious venues in St. Petersburg: Big Philharmonic Hall named after Shostakovich, Small Philharmonic Hall named after Glinka, the Small Hall of the St. Petersburg Conservatory named after Glazunov, New stage of the Alexandrinsky Theater, Yaani-Kirik Concert Hall, Prokofiev Hall of the Mariinsky Theater, Concert Hall of Composers House, etc. The ensemble is one of the basic groups of the International MolOt Festival.

MolOt ensemble toured in Germany, Norway, Poland, Finland, Moldova and Estonia, presenting to the foreign public the works of contemporary Russian composers. An important part of the ensemble’s activities is touring in Russian cities and educational programs. The ensemble performed in Moscow, Yekaterinburg, Novosibirsk, Makhachkala.

In February 2017, the team took part in the recording of the “Anthology of the Music of Young Composers of Russia”. The disc of the MolOt ensemble contains the works of composers from Moscow, St. Petersburg, Kazan, Nizhny Novgorod and Rostov-on-Don. 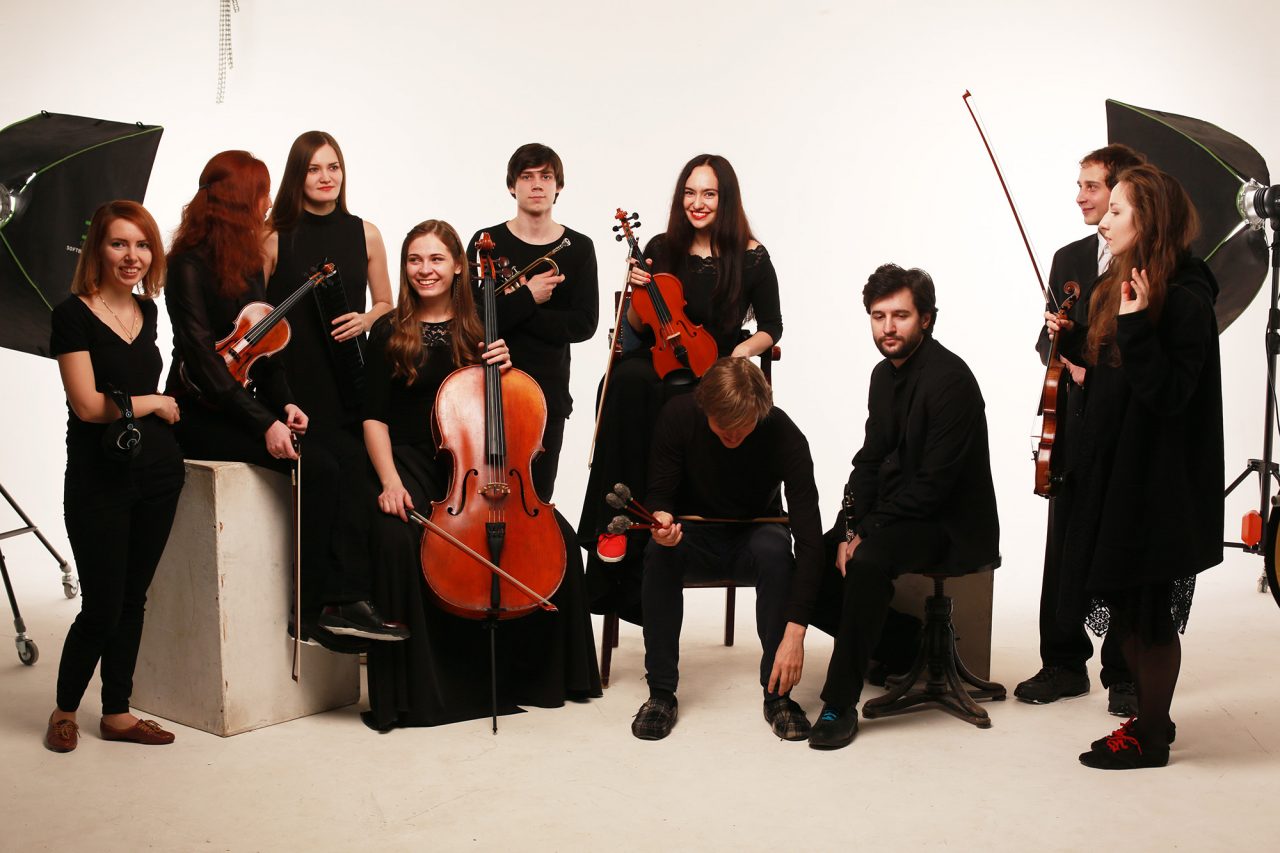 {instead} ensemble was founded in St. Petersburg in 2016. Three main lines developed by the ensemble: search and performance of new music; performance of compositions mainly of the second half of the 20th century; practice of collective improvisation. The ensemble is a participant in concerts within the framework of SoundArtLab of the Baltic Branch of the NCCA (2016-2017), the V St. Petersburg International Cultural Forum, Musical Evenings at the Academy of Arts (St. Petersburg, 2016), Hamburg – Sankt-Petersburg Musikalische Partnerschaft (Hamburg, 2017), Museum Night (Kaliningrad, 2017), the International Forum of Spanish Culture Música Ibérica (Moscow, 2017), the International Festival of New Music “Sound Ways” (St. Petersburg, 2017, 2018).

Concerts {instead} ensemble took place in St. Petersburg, Moscow, Kaliningrad Minsk, Gdansk, Hamburg. The ensemble performed in joint concerts with the Membranoids and the soloists of the ensemble barockwerk hamburg. As part of the St. Petersburg Orchestra of Improvisations, the ensemble participated in the performance of “Spatial Composition 3” by V. Gorlinsky (2016).

Piotr IVANOV (*1992)
Love and Sympathy for Three Composers Without a Shadow of Talent (Premier, 2019)

Ivan ALEXANDROV (*1987)
Intermezzo of a Silent Woman Without a Shadow

International Music Ensemble Augsburg was founded in 2010 by composer Franz Jochen Herfert to perform contemporary music. The members of the collective are graduate students of Hochschule für Musik Augsburg not only from Germany, but from various countries and continents, hence the name of the ensemble, which has a variable composition, uniting from several instrumentalists to 20-30 solo musicians depending on the program. In addition to Augsburg, the group performs with concerts in Munich, Stuttgart, Tübingen, Berlin and other German cities.

Dedicated to the 90th anniversary of Mikhail Bialik 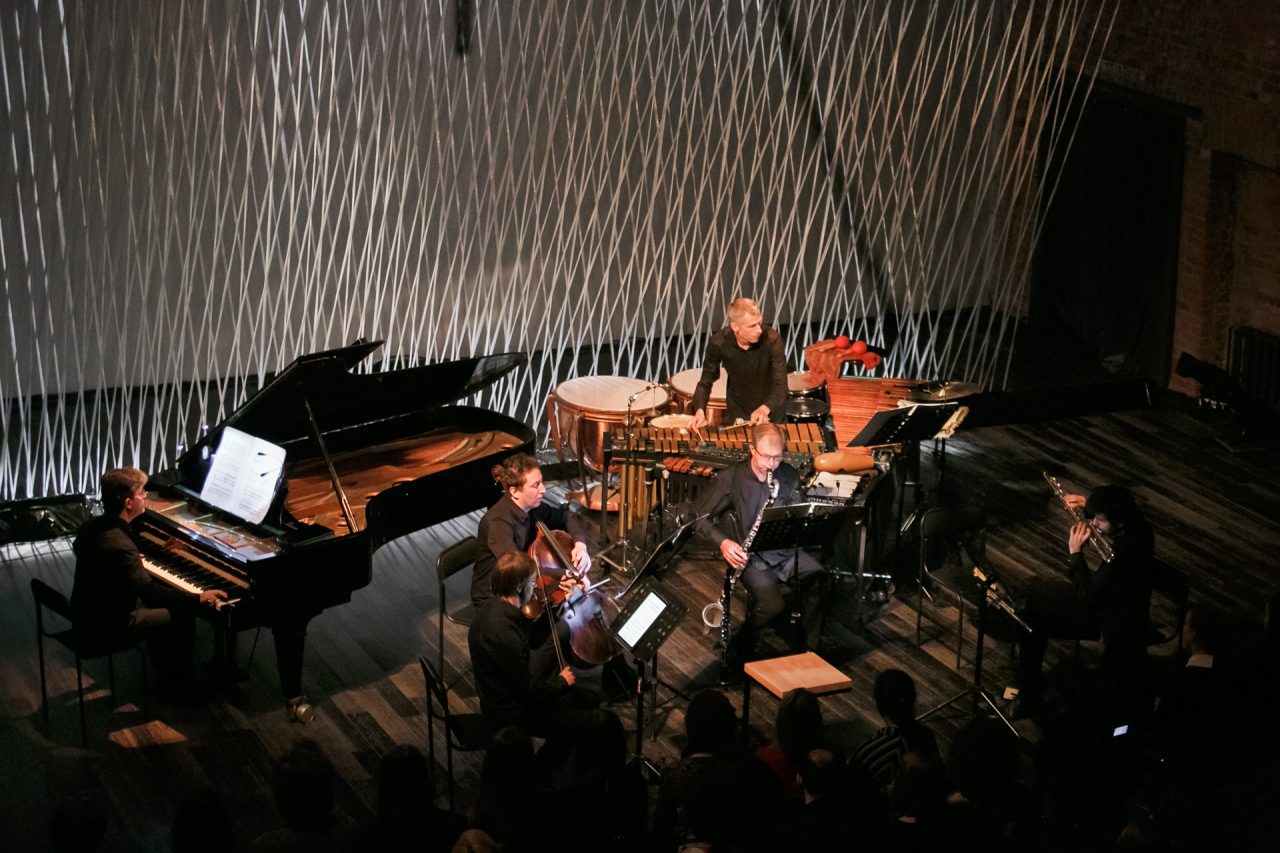 Moscow Contemporary Music Ensemble (MCME) was founded in 1990 by Yuri Kasparov, under the patronage of the famous Russian composer Edison Denisov. The ensemble focuses on promoting 20th and 21st century music. It is Russia’s foremost contemporary chamber ensemble and consists of some of the best Russian musicians specializing in modern music.

MCME has strong educational goals and works closely with both Russian and international cultural foundations to bring contemporary music to a wide range of audiences. As part of this goal, MCME has organized the annual fortnight International Young Composers Academy (Tchaikovsky City, Ural) to bring together both young composers and internationally recognized composers in workshops.

The ensemble’s repertoire is quite extensive and has included the premiere of almost 1000 different works. Particularly, they champion the music of Russian composers of the 1920’s such as Nikolai Roslavets and Alexander Mosolov. Additionally, they regularly perform music by “Shestidesyatniki” (1960’s Russian) composers (Edison Denisov, Alfred Schnitke, Sofia Gubaidulina, etc). MCME regularly performs in many diverse locales across Russia (80 cities) and elsewhere in the world (28 countries). MCME performed on the best concert stages, took part in the biggest international festivals such as “Moscow Biennale for Contemporary Art”, “DiaghilevFest” (Russia, Perm), “Radio-France presences” (Paris), “FrankfurtFest”, “Maerzmusik-Berlinerfesrspiele” (Germany), “Gaudeamus music week”, “The Night of the Unexpected” (the Netherlands), “Warsaw Autumn” (Poland), “Klangspuren” (Austria), “Tranasrt” (Italy) and other.

Each season MCME gives around 70 concerts in Russia and abroad. The special place in repertoire is allocated for music of young Russian and foreign composers. The ensemble also takes active part in the international multimedia and theatrical projects. In 2009 MCME became the winner of the Award ACTION in support of theatrical initiatives. In 2013 MCME got the Award GOLDEN MASK.

Content ensemble was founded in 2018 at the initiative of Petersburg choir students. The life of the ensemble began with the recording of the play by Sergey Leonov r / place. The ensemble consists of 16 people, but varies depending on the project – flesh to a quartet. The participants are students of the Conservatory who are interested in modern culture. The name Content-ensemble shows openness to any musical “content” and at the same time refers to our first project related to Internet culture. In addition, “content” is translated as “content”, which ideologically corresponds to the main goal of the ensemble – not a superficial, but thoughtful acquaintance with modern music (through its performance).